The album was written and produced in between other music projects over a 4 year period.  Byrnes also leads and writes the music for microtonal psych-pop band ILEVENS, and some of the songs on Neutral Paradise were originally conceived for the band. For various reasons these tracks ended up working better as studio productions, with Byrnes performing all of the vocals, instruments, and programming (with the exception of Louis Lopez’s re-tuned trumpet on “Electric Seven”).  Multiple tuning systems are used on Neutral Paradise; special attention is paid to 22 EDO (Equal Divisions of the Octave) but 7 EDO, 27 EDO, and various Just Intonation tunings are also employed. After many years of experimenting with different tuning systems, 22 EDO has become a favorite, offering many familiar sounding chords and intervals but also provides access to less explored musical territory:  neutral intervals, 7-limit and 11-limit harmonies, porcupine and superpyth temperaments, quarter-tones, and so on…

Neutral Paradise is the follow up album to Byrnes’s Micropangaea, an album that also used xenharmonic tuning systems, but on Neutral Paradise the influence of pop music is more evident as it features many songs with vocals, traditional song forms, and more obvious hooks.  The album is loosely structured with a “Side A/Side B” format, with the latter focusing more on exploratory instrumental tracks, soundscapes, and complex forms.  While the album is not about Los Angeles, the city’s hybrid landscapes, cultures, energy, and complicated beauty were the overarching inspirations for the album’s aesthetic and lyrical content. 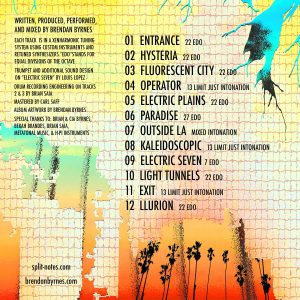